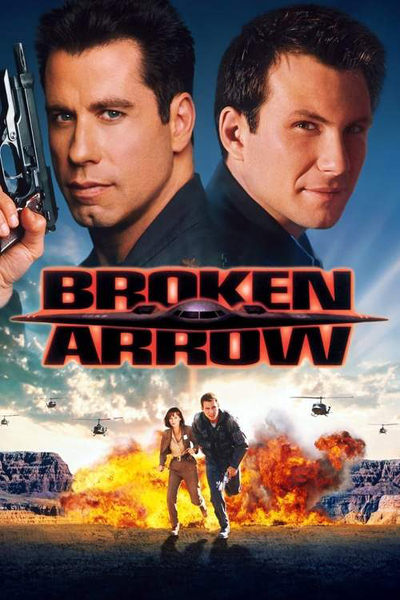 I forgot that 2021 marks 25 years since the theatrical release of my favorite John Woo action film, Broken Arrow! Opening in cinemas nationwide on February 9, 1996, Broken Arrow tells the tale of two U.S. Air Force pilots who play a cat-and-mouse game after one pilot, Major Vic "Deak" Deakins (John Travolta), intentionally crashes their B-3 Stealth Bomber following the unauthorized deployment of two B83 nuclear bombs in the Utah desert...hence the military code phrase 'broken arrow.' Deak's co-pilot, Captain Riley Hale (Christian Slater), is ejected from the bomber after a fisticuff with Deakins occurs inside the cockpit before that. On the ground, Hale eventually finds himself being helped by park ranger Terry Carmichael (Samantha Mathis) in his quest to locate the unexploded ordnance before Deakins and his gang get a hold of them. Also among the cast is Super Bowl XVIII champion Howie Long, RoboCop's Kurtwood Smith and The Shawshank Redemption's Bob Gunton.

Just like in John Woo's more popular American film Face/Off (which arrived in theaters on June 19, 1997), the fight scenes in Broken Arrow are topnotch...from the gunfight inside that abandoned mine where Deakin attempted to hide those two nukes, to the climactic brawl aboard that train where Deakins bet Hale $1 that he wouldn't be able to snatch the remote from Deak's hands before those bombs exploded. And contributing to Broken Arrow's memorability is the hip music score by none other than Hans Zimmer himself. I call it hip because it fittingly captures the persona of the two cool actors who portray Vic Deakins and Riley Hale, respectively. In regards to Travolta, that would explain why Woo wanted to work alongside him again in Face/Off—this time squaring off against Nicolas Cage.

I'd re-watch Broken Arrow after I complete this blog entry if not for the fact that my DVD player isn't working properly. Oh well. Listen to Hans Zimmer's awesome main theme from Broken Arrow below!