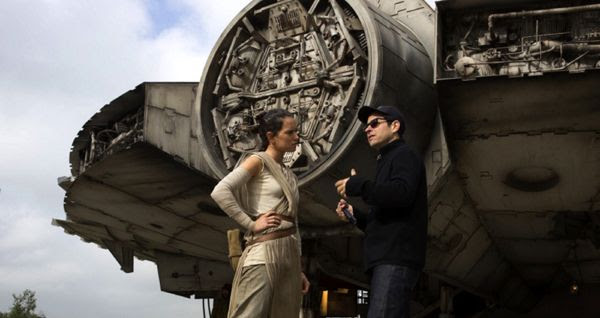 Earlier today, it was revealed by Lucasfilm that J.J. Abrams will return to the director's chair to helm 2019's Star Wars: Episode IX. Much like with The Force Awakens, which was originally slated for a May 2015 theatrical release but was pushed back to December of that year (at Abrams' request), Episode IX will now bow in theaters nationwide on December 20, 2019...the initial release date having been on May 24 of that year. Today's news comes exactly one week after the previous director, Colin Trevorrow of Jurassic World fame, was booted from the job by Lucasfilm president Kathleen Kennedy over creative differences.

In the Disney era of Star Wars, Abrams, The Last Jedi's Rian Johnson and Rogue One's Gareth Edwards seem to be the only ones who have a grasp on what makes a true and enjoyable Star Wars movie. (Ron Howard replaced Phil Lord and Chris Miller as the director of the currently-untitled Han Solo spin-off flick.) Though in Johnson's case, he deserves much props since he is the sole screenwriter and director of The Last Jedi...and that film has avoided any post-production controversies as it marches on toward its theatrical release 93 days from now. Abrams, of course, co-wrote The Force Awakens with Lawrence Kasdan (with some notes by former Episode VII scribe Michael Arndt). And Tony Gilroy was largely credited for directing last year's reshoots that saw a considerable amount of footage for Rogue One re-shot.

Directing upheaval aside, I can't wait to see how J.J. Abrams will end the new Star Wars trilogy. Here's hoping it's as fun and successful (both commercially and critically) as Abrams' first Star Wars installment less than two years ago. And let's hope that there won't be another Starkiller Base or similar Death Star-type superweapon in Episode IX as well! I don't mind seeing these cool guys back on the big screen in 2019, though...despite the fact I've yet to see them in action in The Last Jedi. That is all.

Email ThisBlogThis!Share to TwitterShare to FacebookShare to Pinterest
Labels: Rogue One, Solo, The Force Awakens, The Last Jedi, The Rise of Skywalker