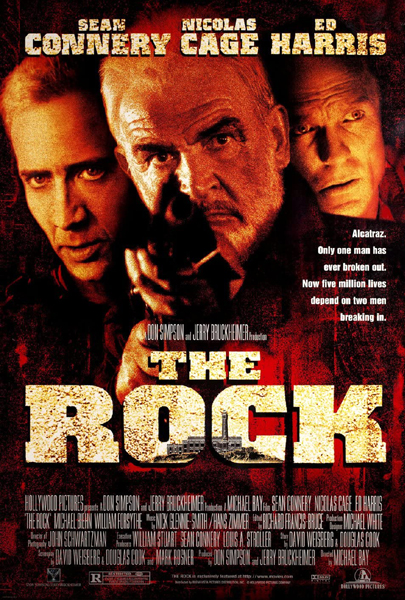 25 years ago today, I watched the Michael Bay-directed/Jerry Bruckheimer-produced action flick The Rock at the theater. Seeing as how I only viewed this film once (even though a lot of folks I know consider it to be Bay's best movie, along with 1995's Bad Boys), my recollection of moments from this flick will probably be inaccurate. (I went to the movie's IMDb page to get their character names correct, at least.) I remember the scene where John Patrick Mason (Sean Connery), a former Alcatraz inmate, effortlessly uses one hand to hold a rope that an FBI agent is grabbing onto for dear life as he hangs over the balcony ledge of a tall building. I recall a car chase scene that either took place before or after that...most likely after. I remember the scene where General Francis X. Hummel (Ed Harris) yells "Cease fire" as his mercenaries gun down the Navy SEALs who infiltrated Alcatraz to neutralize chemical weapons that Hummel placed on the island. (This was a very emotional scene.) And I remember the climactic moment when Stanley Goodspeed (Nicolas Cage)—after injecting himself with the antidote following exposure to one of the chemical weapons—ignites two flares to signal incoming F/A-18 Hornets to abort their airstrike since Mason and Goodspeed managed to secure the deadly nerve agents. And of course, I remember Mason uttering the memorable line (in Connery's British accent), "Welcome to the Rock."

The main reason why I'm reminiscing about The Rock—apart from it being an entertaining, high-octane Bay flick—is because it was released in theaters only a few days before 10th grade (my favorite year in high school) came to an end. This is also the reason why I posted a recent blog entry about Broken Arrow, which is still a fun, action-packed movie without the nostalgia. And next month, I plan on typing about my most favorite film of 1996. I'll give you a hint about what it is: It's a mega summer blockbuster that had the White House getting blown up by a 15 mile-wide alien spaceship...prompting Will Smith and Jeff Goldblum to go and save the world. Happy Monday!